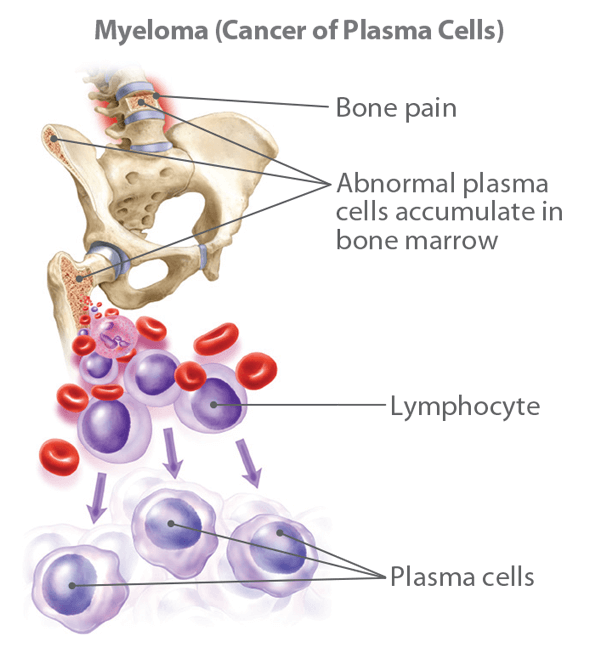 Abnormal cells plasma cells are made in the bone marrow.

Although it only accounts for about 1 percent of overall cancers, multiple myeloma is the third most prevalent blood cancer after non-Hodgkin lymphoma and leukemia. Sometimes called bone marrow cancer because it develops in plasma cells in bone marrow, multiple myeloma is more common in African Americans than Caucasians, and incidence rises with age. The average age at diagnosis is 69, according to the National Cancer Institute. People under 45 rarely develop the disease.

Many kinds of cells make up our blood, including red blood cells, white blood cells (WBCs) and platelets. A particular category of WBCs, called lymphocytes, play a vital role in our immune defense.

The two main types of lymphocytes are B lymphocytes (B cells) and T lymphocytes (T cells), both of which originate in the bone marrow. As the B cells mature, some develop into plasma cells. Plasma cells help the body’s immune system fight disease by producing antibody proteins in response to bacterial infections or viruses.

When malignant plasma cells (or myeloma cells) collect in only one bone and form a single mass or tumor, it is called a plasmacytoma. In most cases, however, the myeloma cells grow out of control and collect in many bones, often forming many tumors. When this happens, the disease is called multiple myeloma.

Next topic: What are the risk factors for multiple myeloma?