The cluster of craters detected by the AI ​​was created by debris of a single asteroid, which broke into pieces as it flew through the Martian sky at some point between March 2010 and May. May 2012. These debris bounced off a site called Noctis Fossae, and left a series of "mini" craters in an area only about 100 feet (30 meters) long of the planet's surface. The largest recorded crater was only about 4 meters in diameter - a relatively small indentation that is hard to discern. Usually, scientists will look for these anomalous indentations by hand analysis (using the naked eye) of images taken and returned by the Context Camera system of the Mars Reconnaissance Orbiter. These images have gigantic resolution, cover a large area, up to hundreds of miles at a time, so the analysis of images with the naked eye becomes extremely difficult, takes time. , and sometimes the accuracy is not high.

To save time and improve the efficiency of future discoveries, AI researchers at NASA's Jet Propulsion Laboratory (JPL) in Southern California collaborated to develop a tool called is "AI-based automatic crater sorting machine".

Experts trained a classification model based on this machine learning algorithm by providing it with 6,830 images captured from the Context Camera system. This data set contains a series of previously confirmed craters, as well as new non-impact photographs so that the AI ​​can recognize essential features.

They then applied classification to Context Camera's entire archive of about 112,000 images. If normally, it takes a scientist 40 minutes on average to analyze an image, now AI can do the same thing in an average of just 5 seconds. However, people will still be needed to monitor the work of the system. 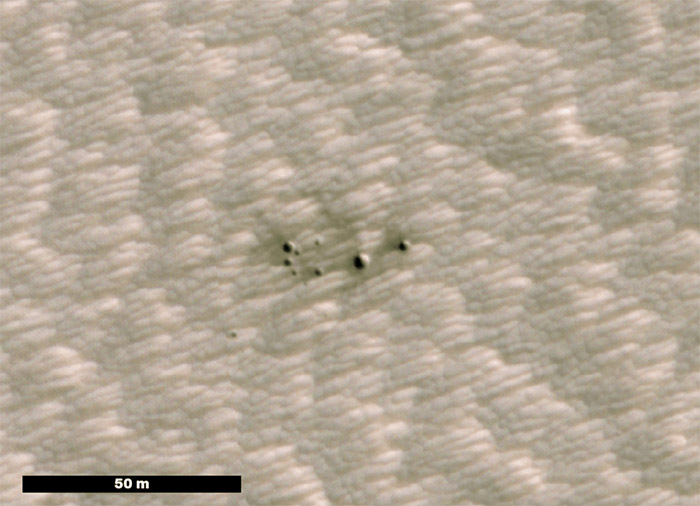 This image, captured by HiRISE cameras aboard NASA's Mars Reconnaissance orbiter, confirmed that AI has detected a crater cluster

The classification algorithm is currently running on dozens of high-performance computers at JPL. Currently, the team wants to develop more similar systems that can be used directly on Mars orbiting reconnaissance ships. Researchers believe the tool could paint a fuller and more vivid picture of asteroid's effects on Mars, which contain geological clues about life on the planet.